Business and first class seating have come a long way. As the demand for luxury accommodations grows, airlines have had to step up their game with the amenities and service that separate economy class from the luxury experience. However, not all airlines have completely risen to the task, and some specific planes continue to carry less-than-ideal seating features for customers who are paying thousands of dollars for a ticket.

British Airways pioneered the lay-flat seat in the 1990s, but it’s fallen behind in recent years. BA 777-200, for instance, is notorious for its 2-by-2 configuration in business class that puts two seats facing opposite of each other, so travelers have the option of making awkward eye contact with each other throughout the flight. Moreover, the seats are only about 20-22 inches wide, which is likely because BA needed to squeeze eight(!) seats in each row. It’s not the end of the world as far as seating goes, but for a supposedly “luxury” accommodation, it certainly could be improved. 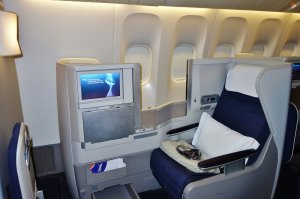 For the most part, reports of American Airline’s accommodations are positive, featuring glowing reviews of their wide (22-26inches) seats and fully flat beds. However, it’s important to be wary of some 757s equipped with domestic first-class seats for transatlantic flights. These seats have a width of a mere 21 inches and are simply reclining seats, rather than the 180-degree flat bed seats one would expect on an international flight. Generally, there’s nothing wrong with booking a business or first class international AA flight–just make sure you know what you’re getting before you hit “purchase”.

Emirates is known for its lavish business and first class accommodations. Occasionally, though, they miss the mark. The 777-300ER is one such example: although outfitted with the iconic wooden finish, business class seats measure just 20 inches across, and the cabin features only angle-flat seats. And, of course, the most prominent complaint is the 2-3-2 seat configuration, which means if you’re sitting in the middle of the aisle seats or next to the window, your only way to access the aisle is by clambering around your seatmates. Which may be one good reason for Emirates to skimp on the 180-degree lie-flat seats.

An example of the angle-flat seat.

Despite their elite Polaris service, some United planes (notably, the 777-200) continue to maintain the 3-4-3 seat configuration, an arrangement that is tedious in economy class and appalling in business. The seats are a disappointing 20 inches wide, although they still turn into fully flat beds. But then again, if two’s a company and three’s a crowd, what does that make United’s 3-4-3 configuration? With virtually no space between them, it might be wise to upgrade to Polaris first class, where you’ll have the comfort and privacy of your own suite. 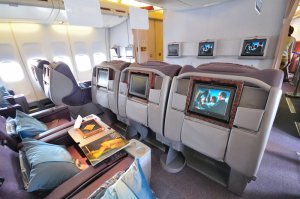 The business class cabin of a Singapore Airlines flight, showcasing the awkward 2-3-2 configuration

Unless you’re lucky enough to snag a seat on the upper deck of Qantas’s 747-400, be prepared to run the risk of an uncomfortable 2-3-2 arrangement in business class. At 21-inches in width, the seats aren’t unreasonable small, but with planes like the A380-800–which features open suites in first class and a 2-2-2 configuration in business–in their fleet, Qantas has proved they’re up to the challenge of maximizing luxury. The 747-400 is somewhat saved by 180-degree flat beds in business, but with that 2-3-2 seating, if you happen to get stuck in the middle seat, you might be there a while.

For the most part, the airline industry has collectively raised the bar on their standards for what “luxury” is. However, the occasional odd seat configuration or diminutive seat may sneak by, so it’s always important to know what you’re getting yourself into when you book.

11 thoughts on “5 Worst Business Class Flights: Which Airlines to Avoid”