The flag carrier of Singapore, Singapore Airlines was founded in 1947 by the name of Malayan Airways. The airline is known for its strong airway presence in Southeast Asia, East Asia, South Asia, and the famous “Kangaroo Route.” The airline also operates the two longest commercial flights from Singapore to Los Angeles and Newark. Singapore Changi Airport serves as a hub for the airline whereas the airlines headquarter is located at Airline Road. The slogan of Singaporean Airlines is “A Great Way to Fly”. 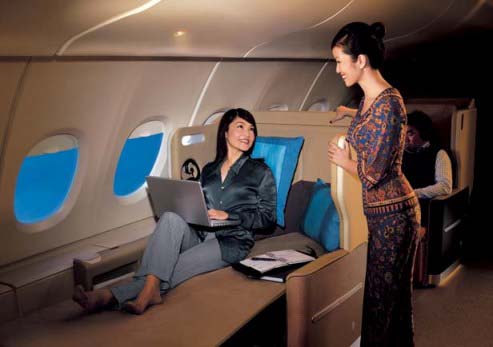 Goh Choon Phong is the serving CEO of the airline. Singapore Airlines along with its subsidiary SilkAir, flies to 62 destinations across 35 countries in 6 continents. It is the largest passenger carrier airline in Southeast Asia. Besides SilkAir, Scoot and Singapore Airlines Cargo are also subsidiaries of the Singaporean Airlines. The airline is a part of the Star Alliance. It has Codeshare agreements with 7 airlines along with Star Alliance members. These include Kuwait Airways, Ethiopian Airlines, Malaysia Airlines, Garuda Indonesia, SilkAir, Virgin Atlantic Airways and Transaero Airlines.

The airline offers three cabin classes: First Class, Business Class and Economy Class. Singapore Airline Suites are only available on Airbus A380, which flies to Los Angeles, Sydney, Zurich, Paris, Melbourne, London, Tokyo and Hong Kong. Of all the cabin services, Singapore Airline Suites are the most luxurious, exclusively designed while keeping the privacy and comfort of travelers in mind. The suites are designed by French luxury yatch interior designer Jean-Jacques Coste. Each suite has separate walls and a door. The suite offers an LCD display along with a leather seat..