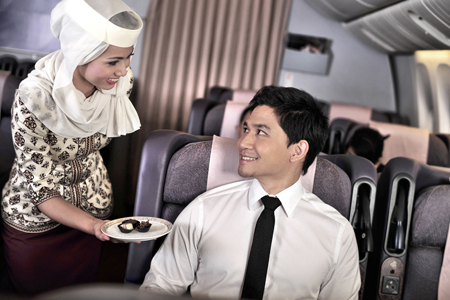 Loyalty program of RBA is the Royal Skies which allows the members to utilize flying points on any Royal Brunei Airlines flight or by purchasing any product of Royal Sky Partners. The loyalty program is divided into three categories: Blue, Silver and Gold membership. The membership stays valid even if there is no activity within three consecutive years of the membership. RBA’s airport lounge is named as Sky Lounge. The Chairman of the airline is Dato Paduka Awang Haji Bahrin bin Abdullah and the Deputy Chairman is Dermot Mannion. The Bruneian flag carrier has Codeshare agreements with Malaysia Airlines, The Airways International and Garuda Indonesia.

RBA offers two types of cabin services: Business Class and Economy class. The SkyDreamer seats in Business class can be reclined into full flat bed and come with plush duvet and a large pillow for added comfort while sleeping. The passengers are offered an extensive range of audio and video on demand collection to choose from.