In Flight Entertainment, a Quick Look at its History

Believe it or not, the first in-flight movie was shown to passengers on board an Aeromarine Airways amphibious aircraft in 1921. The film was called Howdy Chicago. The flight was a short sightseeing trip around the Chicago area. It wasn’t until 1925 when Imperial Airways became the first revenue passenger airline to show a movie on board a short flight from London to Paris. The film was the silent fantasy, adventure flick, The Lost World. The films were shown using old fashioned, bulky projectors that played 31 inch film reels onto a large, white canvas screens. Motion pictures were still very new and the addition of audio had yet to be utilized in film. 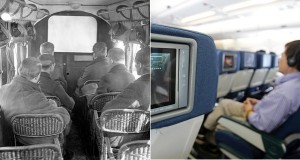 The popularity of in-flight entertainment didn’t really take off until 1960 with the invention of a smaller, more portable film playing system that would play smaller 16 mm reels.  Soon after, the invention of the pneumatic headset would finally resolve the problem of being able to hear over the loud cabin noises. TWA became the first major airline to use the new system boosting them to become the world’s premiere airline to travel on.

The addition of the 8 mm cassette in 1971 made in-flight entertainment a more efficient process, mainly for the flight attendants who could simply change the film during the flight. The video cassette would dominate the way passengers viewed in-flight films until the invention of the DVD which would later become the primary source of all in-flight movies.

In 1975 Braniff Airways became the first airline to offer an extension of in-flight entertainment through the addition of the then popular gaming console, Atari. Passengers could now play popular Atari games in-flight.

Throughout the late 1970s and into the early 1980s, the CRT based projectors began appearing on some wide body airliners. The CRT projector used electric beams of colored light that would beam films onto a fluorescent screen. The CRT was able to display a larger, clearer picture using both video cassettes and laser discs.

The technology that went into the CRT projectors would ultimately pave the way for LCD technology which is widely used today. In 1988, Northwest Airlines became the first airline to feature an in-seat, 2.7 inch LCD monitor on their fleet of Boeing 747s. The new technology gave passengers an on demand selection of audio and video channels to choose from. The instant popularity of this new feature would eventually eliminate the use of the heavier CRT projectors.

In-flight entertainment has come an extremely long way and will continue to improve as technology advances. Today, many of us take comfort in the luxury of our portable mobile devices to entertain us on flights. For the most part, they do the trick. However, the option of a seat back touch screen offering on demand service is quickly becoming the standard on most airliners. It’s growing in leaps and bounds. The smaller screams are giving way to larger, higher definition, touch screens options, loaded with media and live T.V.

The future of in-flight entertainment is anyone’s guess. Twenty years ago, a touch screen LCD monitor was something reserved for science fiction movies. Today it is a reality and one that seems to have endless boundaries.