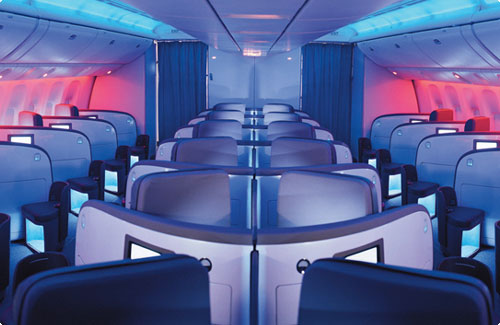 Air New Zealand strives to serve its loyal worldwide passengers with dignity and sees to it that they are well-entertained during the flights. As the flag bearer of the nation, the staff at Air New Zealand makes all out efforts to project the lively, green image of their country across the globe.

Air New Zealand has a little of everything for its passengers from different walks of life. Yet of all the options, Business Premier is the high end service class in Air New Zealand with herringbone layout configuration, giving every passenger a direct, yet private access to the aisle. The seat is equipped with three reading lights, in-seat power and a separate bottle holder. Tasty cuisine and a truly accommodating crew see to it that your journey becomes a memorable one.